Last year Inagro renewed the concept of breeding nets for the black soldiers flies to upscale the cultivation of black soldier flies to a semi-industrial level. They continued to perform research to further optimize the cultivation and the design is again adjusted. Meanwhile, the cages are made from more durable and hygienic material. The flies feel well in their new environment. At this moment the record is on 33 mg eggs per female!

From prototype to final design
The prototype breeding nets of last year have a record yield of 25 mg eggs per female. If you convert this, this means a potential harvest of 75 grams of live larvae per fly. A very good result, only there were still some growing pains that had to be solved. Inagro decided to develop this concept further into a final design.

The first flights in the new cages, however, were disappointing. The yield was only 2 mg/female or less than 10% of the yield with the prototype nets. After many tests it showed that the new material for the bottom (plastic instead of wood) makes the pupae tray too fluid. After perforation of the pupae tray this problem was solved and the real production could begin. At this moment the record of number of eggs per female is already on 33 mg!

Things to expect in the near future
Further experimenting with nine breeding cages with the focus on: 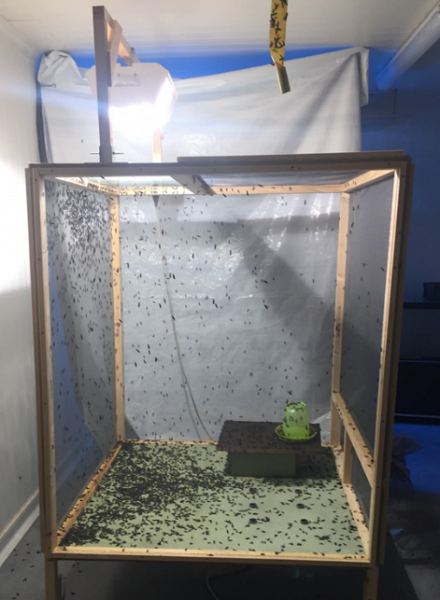 Example of breeding nets in 2018 as prototype

Example of the renewed breeding cases in 2019 as final design