On February 12 a meeting took place between InDIRECT (Horizon 2020-BBI-PPP project) and BioBoost (Interreg 2 SEAS) in Mol (BE). Both projects seek a common goal, namely create value from waste streams from the point of view of circular economy. InDIRECT was represented by the leading partner VITO, for BioBoost Inagro and Vives were present. The meeting was conducted on the work around insects.

InDIRECT is a project in which residue flows are converted via bio refining to raw material for various industries. The residual flows can be directly refined or indirectly by feeding them to insects. The indirect approach allows a heterogeneous and wide spread range of residual flows to convert to a homogeneous insect product. From the insect products high-quality components such as proteins, fats and chitin can be refined.

Processing the residual flows with insects is the largest interface between both projects. BioBoost is mainly working with residual flows from crops from the horticulture, InDIRECT worked with predominantly vegetable waste streams from various industries (oil-cake, grass, foliage, fruit and vegetable waste streams). Insects are, however, just one of many outcomes within BioBoost that is explored. The insects research stops when the larvae are harvested and the residual flows are processed, InDIRECT also examines the further processing capabilities of the insects.

The result of the afternoon was a fascinating discussion about the potential of insects for processing residual flows. Despite the fact that InDIRECT and BioBoost have worked independently of each other,  the views on how residual flows with insects have to be processed are converged in the same direction. However, neither claims to have the entire process of insects breeding covered. So there are still unanswered questions for future collaborations in the coming years. 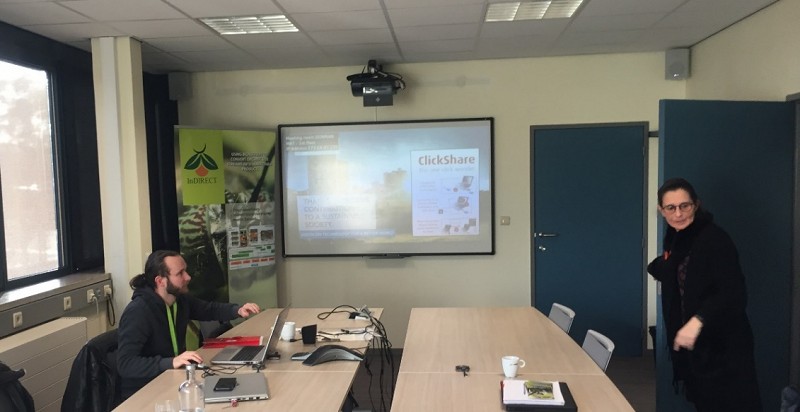