Do farms become insectfarms in the (near) future?

On October 17, nearly 100 persons who were interested in insect breeding came to the first information evening 'insect breeding for farmers' at the location of partner in the project BioBoost Inagro. For most attendees it was their first encounter with legislation, technology and economics in regards to insect breeding. After the theory, the participants were given a tour of the breeding areas at Inagro.

Insects on a farm

On many farms, the infrastructure is already in place, think of pigsties, mushroom and chicory cells. Horticultural farms have a lot of crop residues such as chicory root, cauliflower leek leaves or debris. Mealworms and the larvae of the black soldiers fly can be perfectly used as a 'waste disposal' of these residual flows. An insect that you propagate correctly, you may feed alive to poultry or pigs. 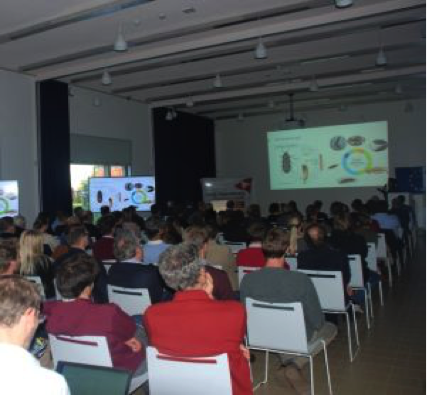 During the information evening the basis for insect breeding was explained. First, the utility, the possible applications and the potential site in the primary sector was outlined.

Evelien Decuypere of the Strategic Platform Insect breeding spoke about the tolerance of the Federal Agency for insects in the diet, pending information regarding the European Novel Food regulations. There are seven species of insects authorized as feed in aquaculture. This is possibly extended to applications in the poultry and pork sectors. Inagro explained through an overview the research done in regards to insect breeding: improving the breeding efficiency by responding to certain stages of the life cycle. Filip Wouters, researcher at VIVES and also a partner in the project BioBoost, showed an economic analysis by automating the mealworm culture. Willy Westenenk, Sprinkhaan BV, told his vision of insects breeding on farms.

Photo left: the larvae of the Black Soldier Fly changes residual flows into  feed. Inagro tested bean foliage, cut stoked chicory roots, sticks of sprouts, cauliflower and leek leaves residues. Photo right: Chicory Roots are the ideal menu for the mealworm. Chicory growers can grow insects perfectly when demand for chicory is limited. Their vacant climate cells can be used and it is also financially interesting.

To see and taste insects

After the presentations, the attendees could chat during a reception with insect bites. The crickets encased in chocolate and cupcakes with mealworm paste were popular. There was also a guided tour of the insect breeding areas at Inagro.